I love baking, and I love to just put things together that are easy and delicious. I made these brownies recently for a friend who was going on a road trip, after all who doesn't want a tasty treat while traveling.

Basically I took a Ghiradelli brownie mix, followed the recipe on the back of the box and then added all of the candy that I have in the house. In my candy jar I had some Reisen camels, and some of these delicious little toffees that you get at IKEA (I had to put these into the brownies because I could sit down and eat the entire bag in one sittin). Then for good measure I threw in a candy bar that had honey and toffee in it.

These brownies were so delicious! They came out fabulous! Now for those of you who do not have the above mentioned candy throw in whatever you have, if you have Snickers, or Twix, whatever just put in in. It just kicks it up a notch  and makes it a little different.

Posted by Elizabeth@ Pine Cones and Acorns at 9:20 AM

What could be easier than this, and they look delicious!

Wonderful idea...and a great way to use up all the leftover candies I seem to accumulate. (I also love adding coconut to brownies.)
Jane (artfully graced)

I know each and every one of those "misc" chocolates. How sad is that?

This post contains affiliate links.  Bar cookies are a favorite of mine because you basically put everything in the pan, bake it and yo... 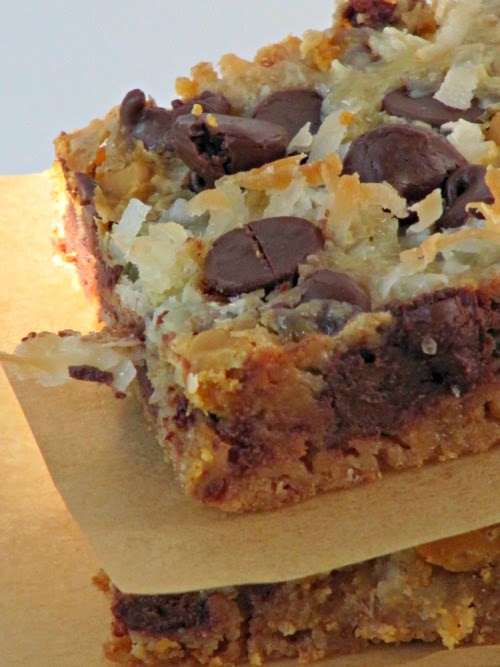 I love chocolate! Join me as I feature recipes, products and adventures featuring my favorite food.

PAID ENDORSEMENT DISCLOSURE: In order for me to support my blogging activities, I may receive monetary compensation or other types of remuneration for a link to any products or services from this blog. Your support keeps this blog running and is greatly appreciated. AMAZON DISCLOSURE: The owner of this website is a participant in the Amazon Services LLC Associates Program, an affiliate advertising program designed to provide a means for sites to earn advertising fees by advertising and linking to Amazon properties including, but not limited to, amazon.com, endless.com, myhabit.com, smallparts.com, or amazonwireless.com.